I was behind the relaunch of the RNZ website in 2005, the release that finally brought RNZ audio and news to the public at one web location, and in early 2006 I turned on the podcast feeds for some of RNZ’s most popular shows. They were an instant success for those in the know; podcasting was not yet ‘a thing’.

In the last few years that’s changed. Articles heralding podcasts as a new growth industry are now common, with commentators talking the format up.

For example, the recent news headline, “If a Serial episode was a mountain peak, S-Town was the Himalayas”, provided more fuel to the belief that the market for podcasts is booming. While the article behind this is technical, many will look past that, rushing out to buy a microphone and get on the bandwagon.

Having seen all the stats from 2006 through to 2016 (when I left RNZ), and followed trends in the rest of the industry, I have formed my own views on the format and its future. I followed the work of many of the early innovators in this space such as twit.tv and 5by5, and have watched many podcasts come, and go.

The podcast landscape in the last few years has changed dramatically, but it is not all good news.

Gimlet Media announced that they would no longer fund the Mystery Show podcast, shocking listeners, and the community. Other podcasters have also ditched ‘underperforming’ shows. Many others have so-called underperforming shows, but as there is almost no cost to them – the host and guests are not paid, and the shows have simple production values – they continue.

Tom Webster of Edison Research made some interesting points in a podcast with Mitch Joel. In it he said that podcasting is growing at a rate of 1-2% a year, and that even hits like Serial have not changed that. He also said that while consumption of live streaming services has tracked with the growth of smartphones, there is still an 80/20 music/talk consumption split among consumers.

Jim Grau from Gimlet Media is reported as saying:

The audience numbers for the past few months, which had been growing gangbusters before, have plateaued and even kind of fallen for pretty much almost all of our shows.

The reality is that there is a fixed number of people within reach that will listen to a given podcast. In general, referrals (recommendations by others) are pretty rare. How often has someone suggested (or sent a link) to a video to you, versus suggested a podcast? Even in the radio industry where I worked for 35 years, ‘cool podcasts’ was hardly ever a discussion topic. (Apart from Serial; more on that later.)

All podcasts have a natural audience. Podcasts are a product that requires time to consume, and all these products are (ultimately) useful to a limited audience. You cannot sell a product to someone who does not need or want it, or does not have time to use it. Once you have exhausted the people who do want the product, that’s it. It is why pyramid schemes don’t work. Some economists will apply arguments about abundance, but the reality is that all markets are finite, and the cost of acquisition is not the same for all customers. 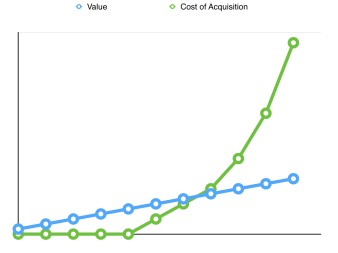 The cost of acquiring a listener for many new podcasts, especially when the podcast is new, is virtually zero. For a time things seem to be going really well. As the podcast grows, the size and value of the audience grows in a linear fashion.

But over time, the cost of acquisition increases, eventually exceeding the value of the customer. This is because it requires an increasingly large network effect (or advertising budget) to ‘break out’.

The point at which the value acquiring a listeners exceeds the value of that listener is a defining moment in any business. Some will continue, perhaps getting additional funding from some source to ‘buy more runway’ and tide them over until there is a ‘breakthrough’. At this point there are only two options – increase the value of each customer (tilting the line up), or reduce the cost of acquisition. Or increase the cost of advertising.

As a product pushes out beyond its initial (usually easy market), the cost of acquisition goes up. Adjacent markets are a little more difficult. Also note that the COA includes the cost to reach the customer, and the cost of the customer to reach you.

Here is an example. Image a lemonade stand in a busy street. Its primary market is cars driving by. COA is low. It costs customers nothing but time, and not very much of it, to buy lemonade. To expand that market you could place signs in adjacent streets, based on traffic direction, to get people to make a detour. The total cost of acquisition also includes the cost of the additional petrol used to make the detour, and the extra time taken. For those customers there may not be enough value to convince them to take the detour. Or they might be really thirsty, but that is never certain. To expand more, signs could be placed further out. They would have to be bigger, perhaps with directions. More petrol, more time, and now directions are required. Higher total cost.

Physical/Virtual (i.e. network)  distance increases the COA. The same is true online, but the cost profile is flatter, and customers can appear to be close. Wellington is a close to Auckland as it is to London.

It is not completely flat though, as some online advertising outlets would have you believe, because the most effective advertisements are targeted, creating acquisition zones, much as we had in the lemonade example above. You can easily target lemonade lovers on Facebook, but the cost of getting to their friends is higher, friends of friends even more.

On the internet the person across the road, in network terms, might be further away than someone on the other side of the planet.

So, what do we know from podcast stats? When a new podcast is launched, especially when it can be promoted to its natural audience, it initially grows quickly. Take a radio programme as an example. They start a podcast and promote it on-air during the show to their audience. The cost to promote and acquire is low, and growth is initially very fast. This is what I saw from 2006 until about 2010 with the RNZ podcasts. Once that audience was exhausted, the next step was station-wide advertising. The cost is slightly higher, but not excessive. Once all current station audience have been acquired for a specific podcast, you have to go wider. Billboards, online ads, and bumper stickers, sharing your content with others, for example. Suddenly things get a lot more expensive, and the growth is much, much slower. Once podcast had passed the initial growth phase, they all settled down to 1-2% growth.

Alongside this something else interesting happened. While the total podcast audience levelled off, the number of visitors and page impressions to the main site continued to increase. The podcast audience hardly budged at all, suggesting that even though the reach of the site was increasing (and the amount of live streaming being consumed) the proportion of this interest in consuming podcasts was actually declining. We had reached our natural audience. (Things may have changed after since I left in 2016, and perhaps there has been an increase due to content sharing, but I’ve seen stats elsewhere that suggest probably not.)

Now, the audience for individual podcasts in a group (like RNZ) could be grown with careful cross promotion. It has to be very careful cross-promotion, as it is still perceived as advertising. This American Life did this with Serial, and most recently with S.Town.

What lessons can be learn from this information, to apply more widely?

The first is that even though the numbers are bigger for US-based podcasts, the same is true – there is a limited audience for any genre of podcast, and generally people only consume 3-5 podcasts a week. There will be a few hits, but these are outliers, not to be used as the ‘potential of the market’. It is not possible, in my view, to get every podcast up to the level of Serial or S-Town.

Getting your immediate natural audience is easy. Poaching a listener from another podcast is harder, but not impossible. You are preaching to the already converted. Growing the market by converting a non-podcast listener into an adherent is very hard (and costly), and yet, this is the only way to get any kind of growth. Note that I did not use the work sustainable – we are still dealing with a finite number of potential listeners.

Think about this from your own perspective. I am willing to bet that as you have found new podcasts you’ve stopped listening to others (because the of time constraint). I remember dropping the 30 minute The Ruby Show when the shorter Ruby 5 came out. I dropped This Week in Tech because it was getting too unfocussed and not worth the 90 minute time investment compared with reading the news via RSS.

Where does this leave us?

The thing that makes the difference, that makes a podcast (or any product) stand out in a crowded market, is quality. Quality of the hosting and questions, the production (sound, editing), the quality (and relevance to the listener) of the guests, and the quality of the story telling. It also needs to be unique on some way. That might be a well-known host, but even that can fail if they cannot conduct a good interview.

Podcasters also needs to be a coherent strategy. What is the podcast trying to achieve, who is to trying to reach, how will it grow over time. What will it do, and more importantly NOT DO. Serial and S-Town were able to leverage off an existing audience, most stand-alone podcasts do not.

This may all read a little cynically. That’s probably because I’ve been through multiple sharemarket crashes, the dot-com crash, and more recently the crypto-craze. Remember the tulips?

So, hype or new hope? Neither. Podcasts will come and go, as will audiences as they find content that is more interesting and engaging. Some long-running podcasts have huge audiences. They’ve created sustainable businesses by focussing on quality, rather than on novelty.

My advice to podcasters is to focus on something that is sustainable, rather than on hyper-growth, so that you can be around to tell more stories tomorrow.

[This was written in 2017. Not sure why I never published it, perhaps the ending? ]