On the Passion Facade of Sagrada Familia is a 4×4 magic square. All the lines in the square add up to the number 33, which was the age of Jesus at the time of the Passion. It is also, by coincidence, the number of this post. 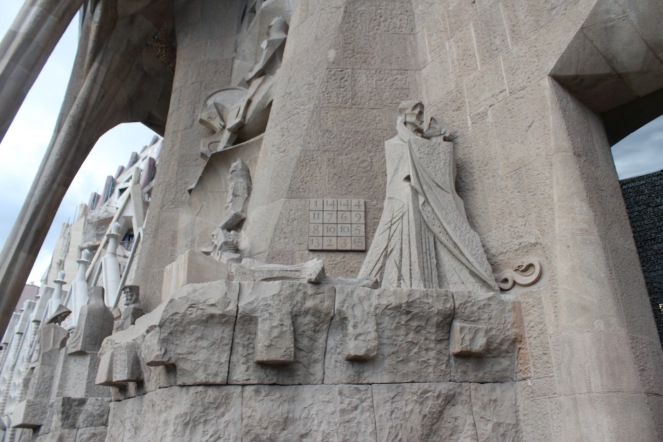 In order to understand the architecture of the church, it is important to understand what was happening in Catalonia around the time Gaudi designed it.

In 1878 Gaudi’s teacher Lluis Domenech i Montaner published one of the seminal texts of the modernista movement –  In Search of a National Architecture. Montaner wanted to create a style that would reflect the Catalan soul and give Barcelona an aesthetic unique in Spain and the rest of the world. The Catalan Art Nouveau movement, as it became, quickly evolved into an expression of its strive for independence.

Gaudi quickly took up his teacher’s challenge, and after a large donation from a benefactor, he was able to radically change the direction of the cathedral’s design.

The outside the building is currently dominated by the two facades and eight towers that are complete, or nearly complete – the Nativity Facade and the Passion Facade. Another four towers are to be built at the front of the church above the not-yet-started Glory Facade, making 12 in all, one for each disciple.

The church is the most photographed building in Barcelona and it’s easy to see why. Below is a view of the Nativity Facade, which was the first external part of the church to be designed solely by Antoni Gaudi.

It is the most ornate of the two completed facades and was completed first (rather than the front of the church) so that future architects would have an example to follow. Like most architects of large European churches Gaudi knew he would not live to see it completed. 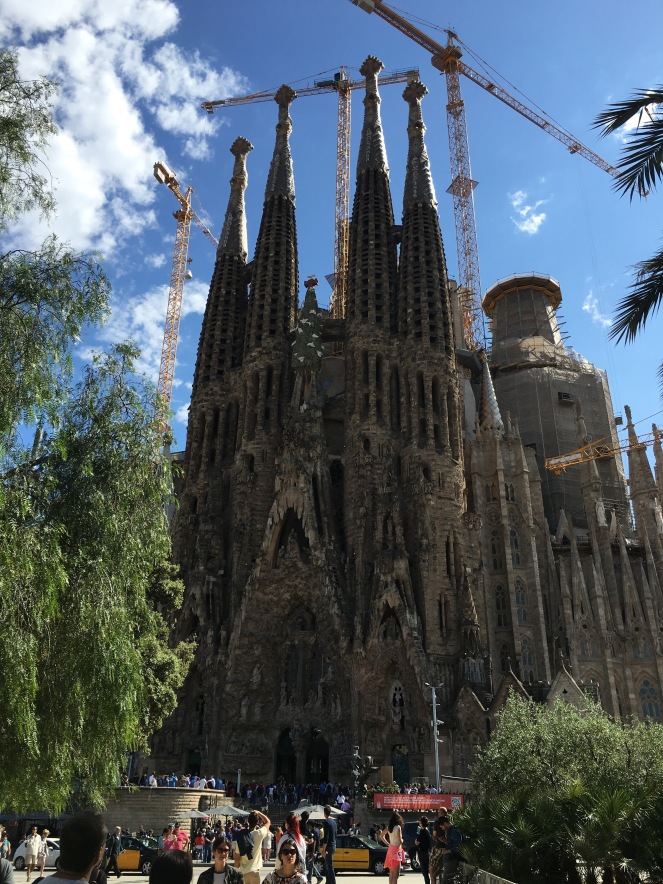 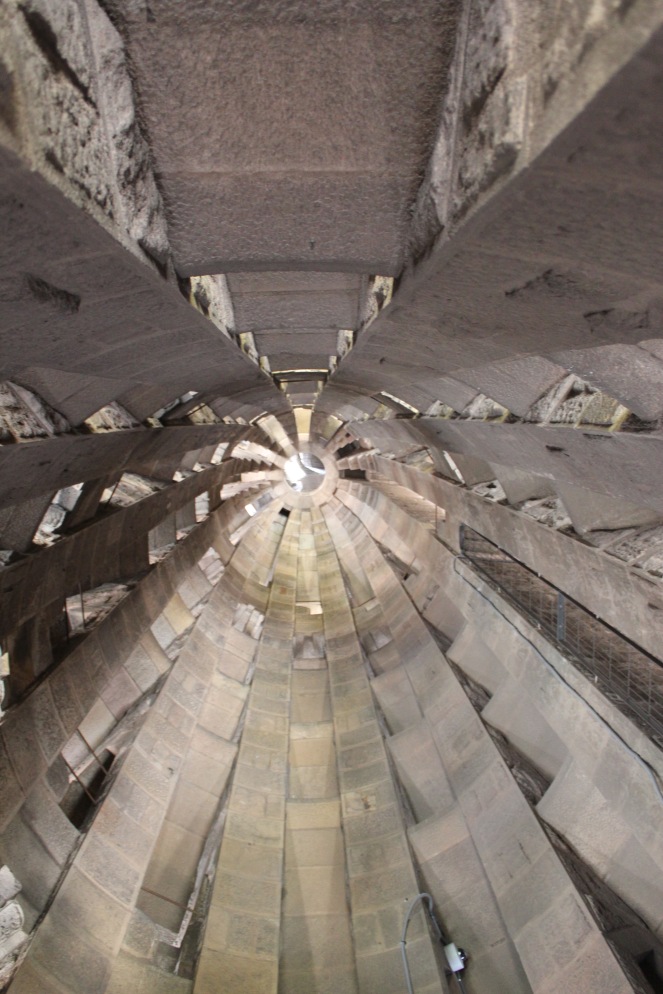 Looking directly across the inside of the towers you can see how it was constructed and the stone-work in detail. 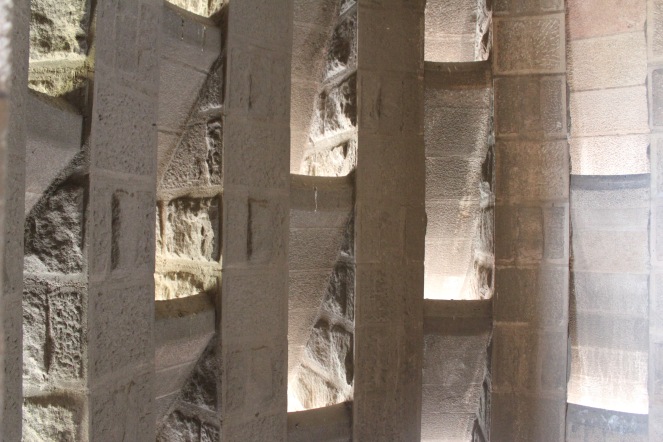 We accessed one tower on the Nativity Facade via a lift, then walked between that and the next tower before descending via an internal staircase.

Here is a view looking straight up from the walkway between the towers. The cranes are there because the outside of the church is still under construction. 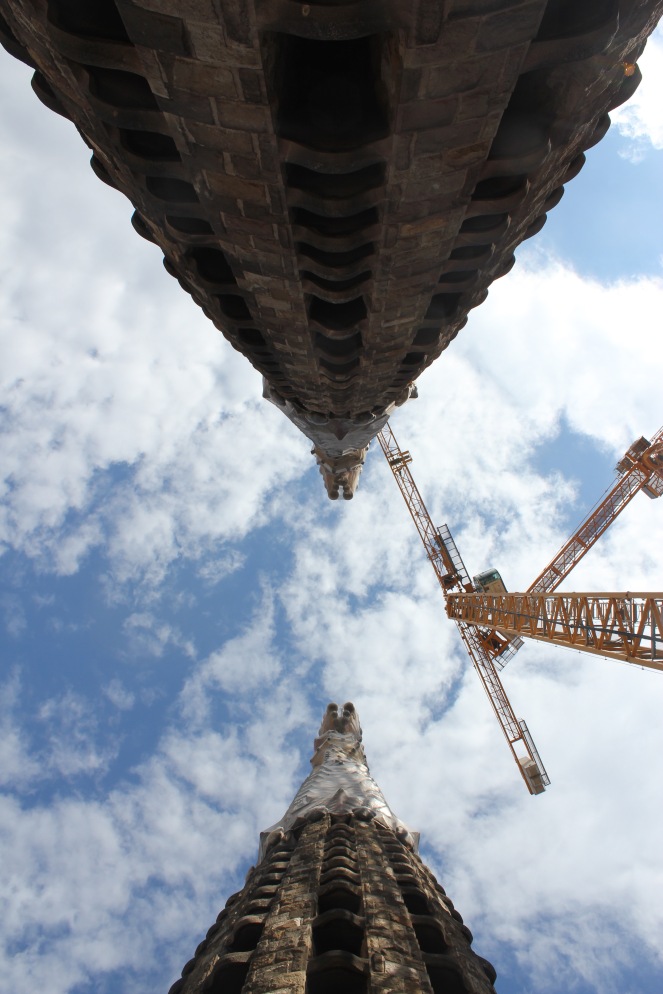 The way down, for a lover of spiral staircases like myself, is fairly awesome. First you work you way down the tower like this. 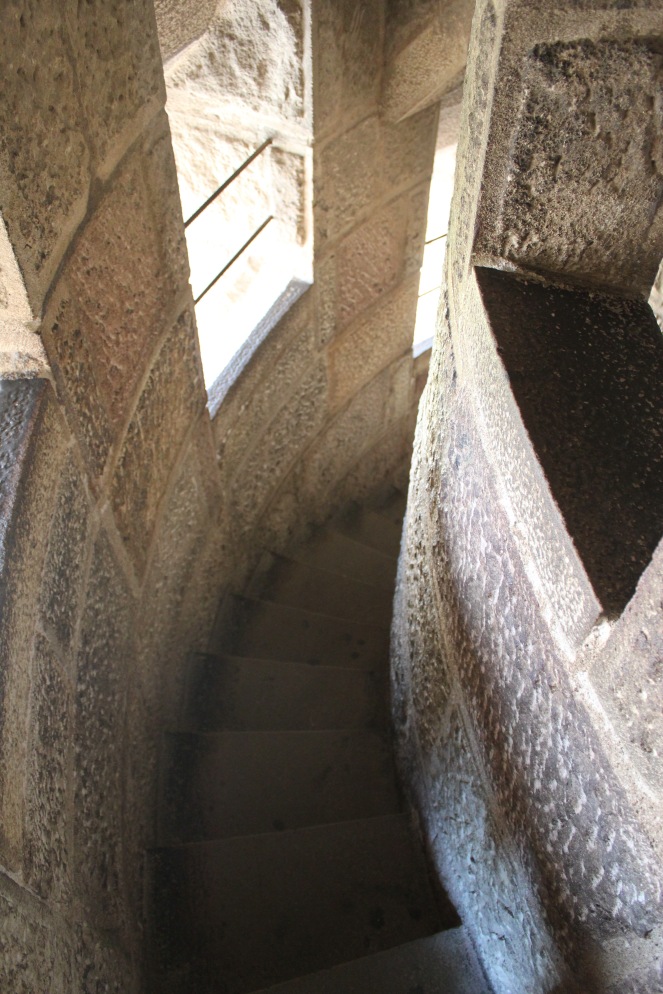 And for the last section an even smaller staircase like this. 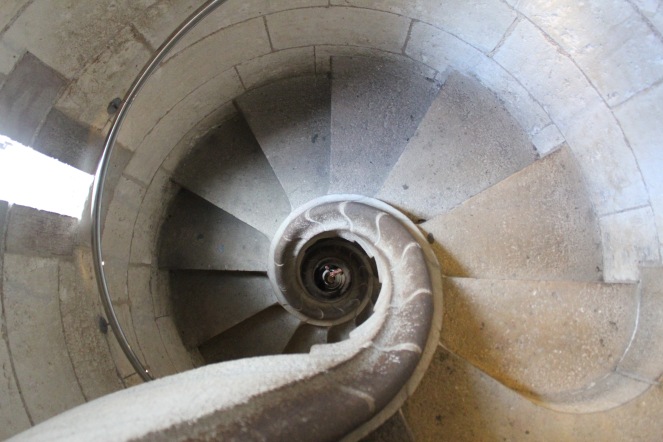 We got some very close views of parts of the Nativity Facade on the way down. One example is these doves on the tree of life.

Another was some of the mosaic fruit decorations. Gaudi was inspired by nature, and this influence can be seen everywhere. 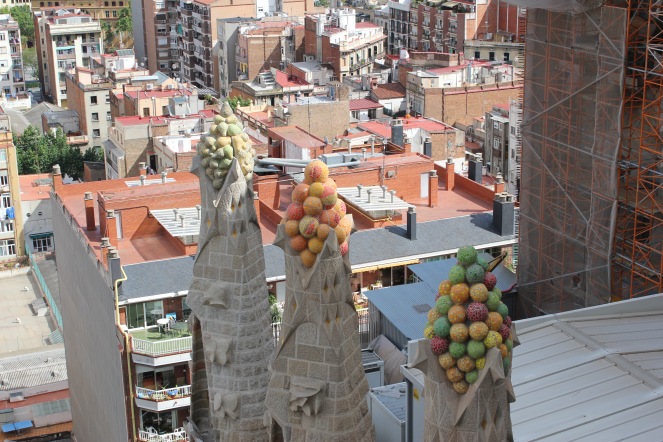 This view is looking up the front side of the facade. 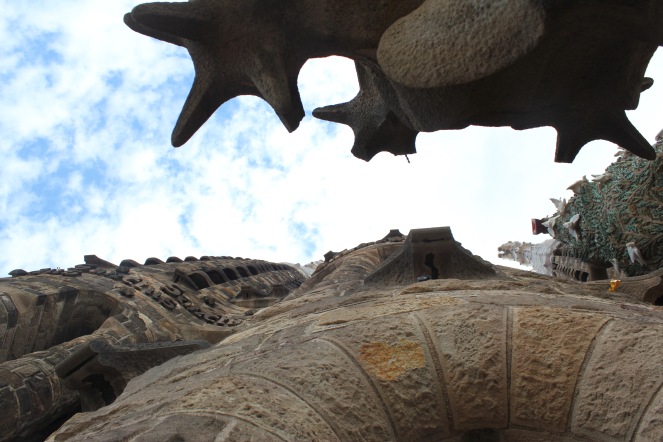 There are small details everywhere around the cathedral, and sadly most people were walking past most of them. Shell-shaped fonts were placed at the entrances to the church (for Holy Water). 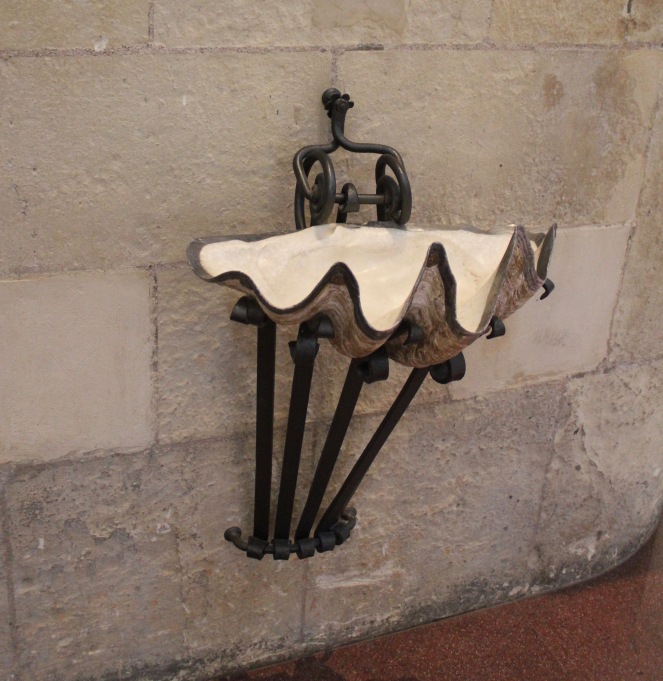 The oldest parts of the church are actually the crypt and the Apse. Those were designed in the gothic style by the architect of the Diocese, Francisco del Villar. Villar had a falling-out, or as some sources say ‘a difference of opinion’, with the Chairman of the Holy Brotherhood, José María Boca Bella. Bocca Bella was effectively in control of the project, forcing Villar to resign his post. He was replaced by Atoni Gaudi who completed the Apse, below. 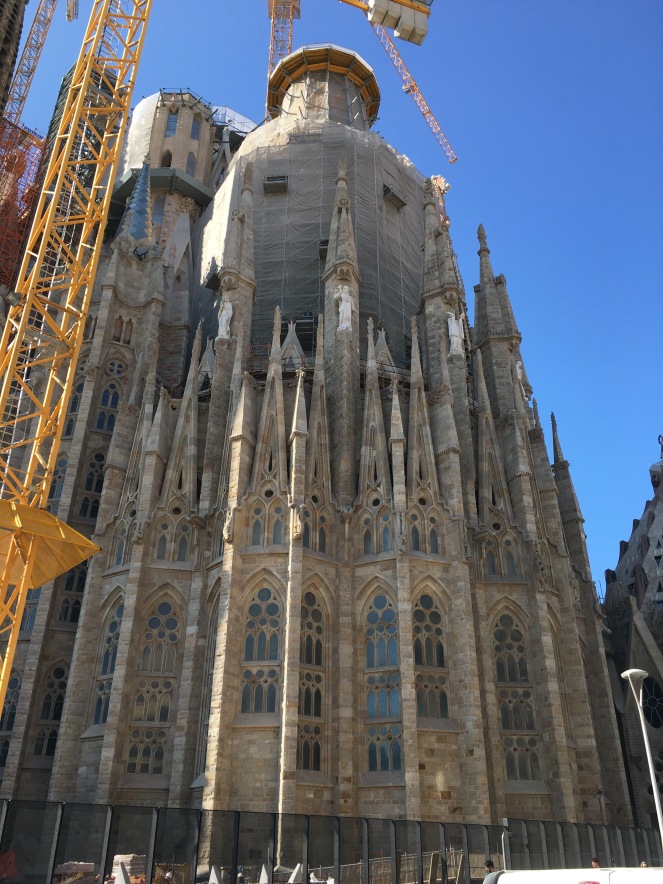 The Passion Facade is less ornate and bleak, reflected the pain and suffering of the crucifixion. This picture was taken from our apartment. 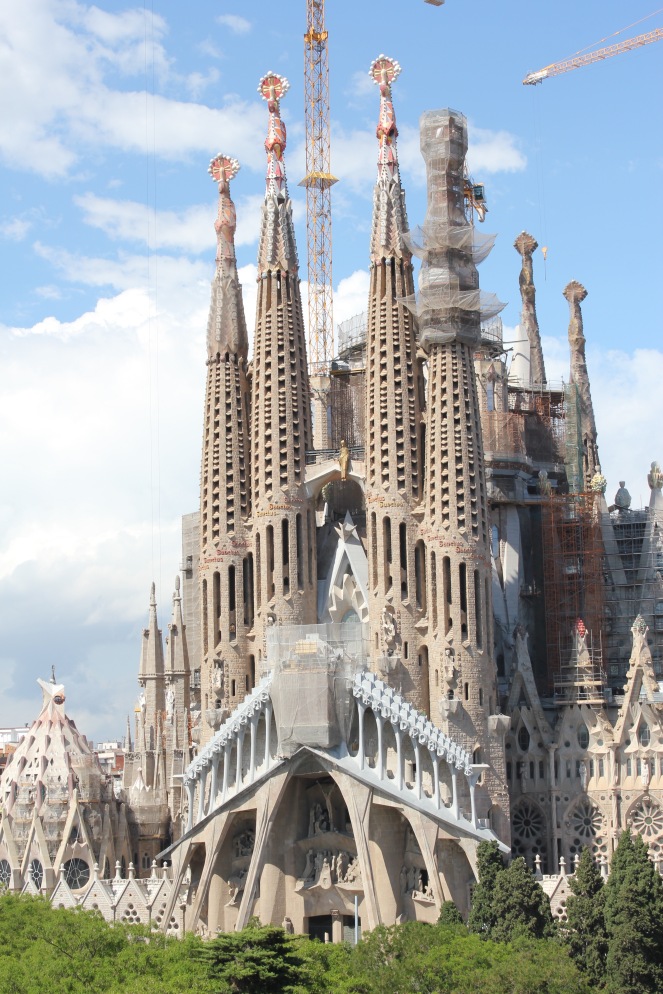 I want to move now to the inside of the building with is magnificent. Gaudi’s inspiration – nature – is very evident in tree-like structure of the columns that hold up the ceiling. 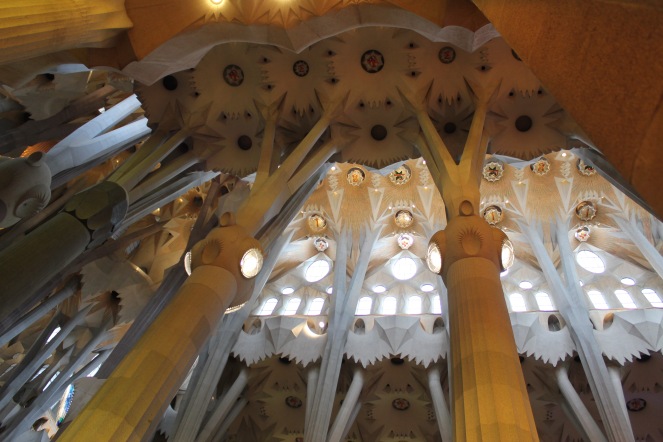 The quality of the light inside the church deserves a special mention as it is unlike any other church or building I have ever been in. The light is filtered through the many stained glass windows, has a soft forest-like quality to it. We were there are 4:30 pm, when the sun was low in the sky, shinning directly through the west-side windows creating a beautiful glow. 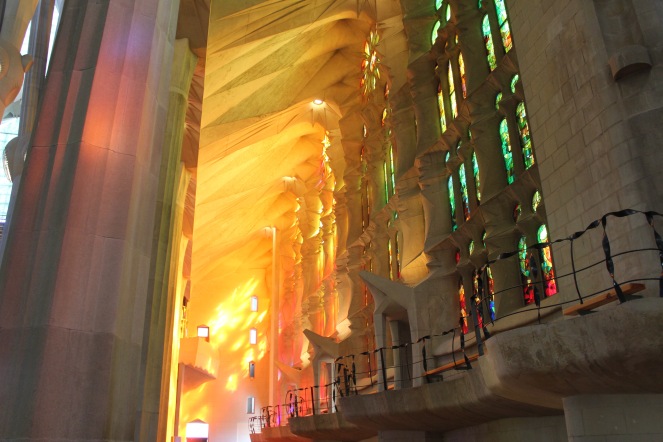 Here is another angle looking at two bays of windows on the same side. 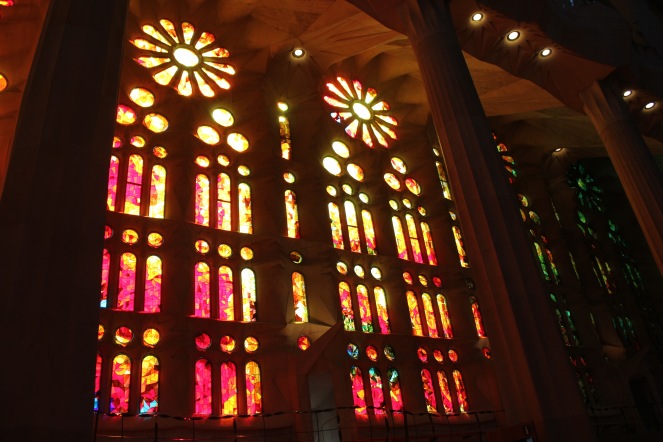 Light even emanates from the ceiling. 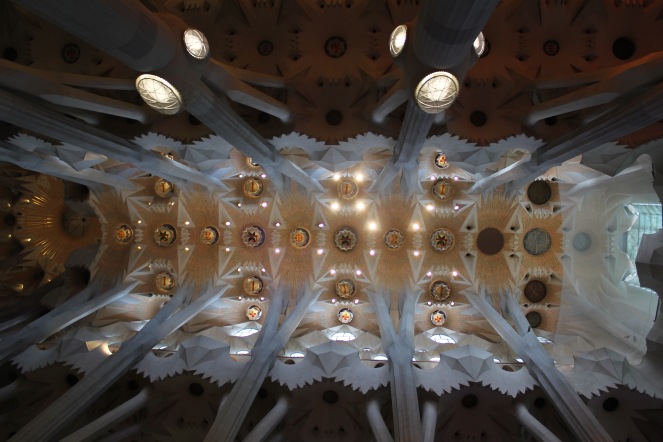 Gaudi used a system of strings and weights to work out the loading on these columns, but upside down. The columns with greater weight on them are made from harder stone and of greater diameter. 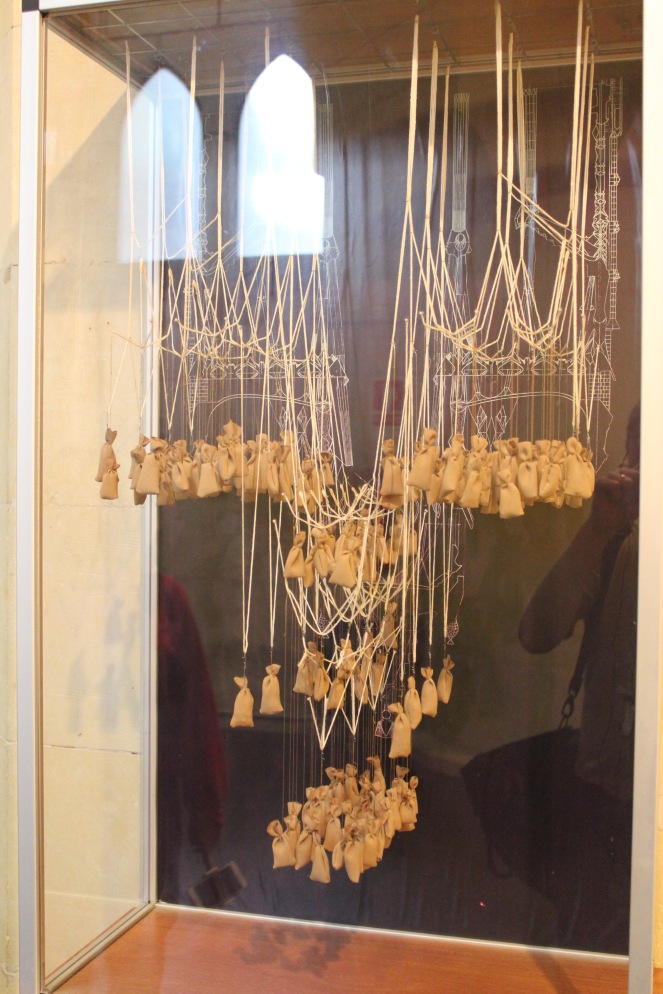 This view of the eastern wall of the church faces the rising sun, and you can see the choir in the top section. 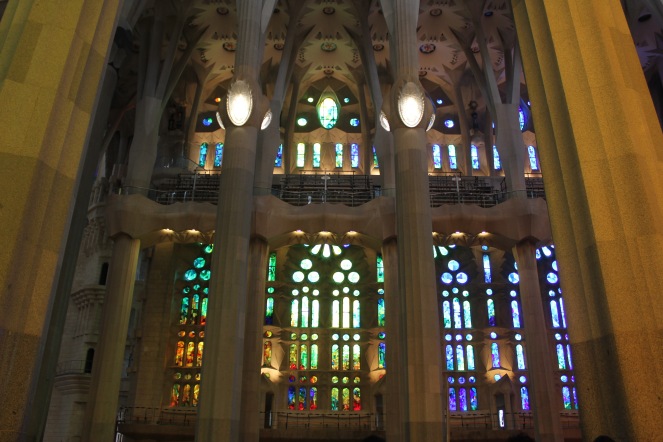 Light bounces of different surfaces in the church and feels very even, but the quality of it is almost dream-like.

This view is looking towards the alter from the back of the church. 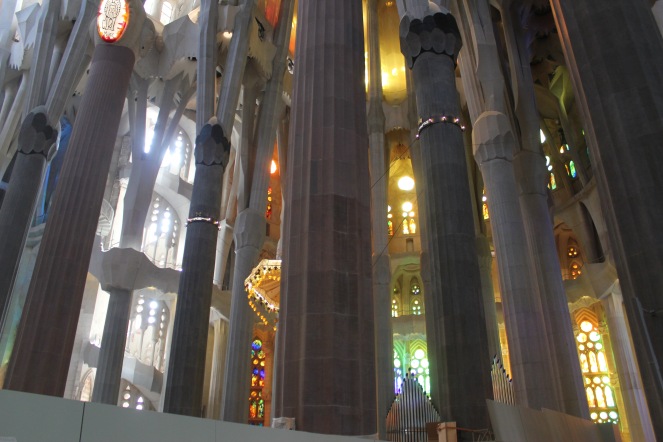 And this a view of some more of the stained glass. 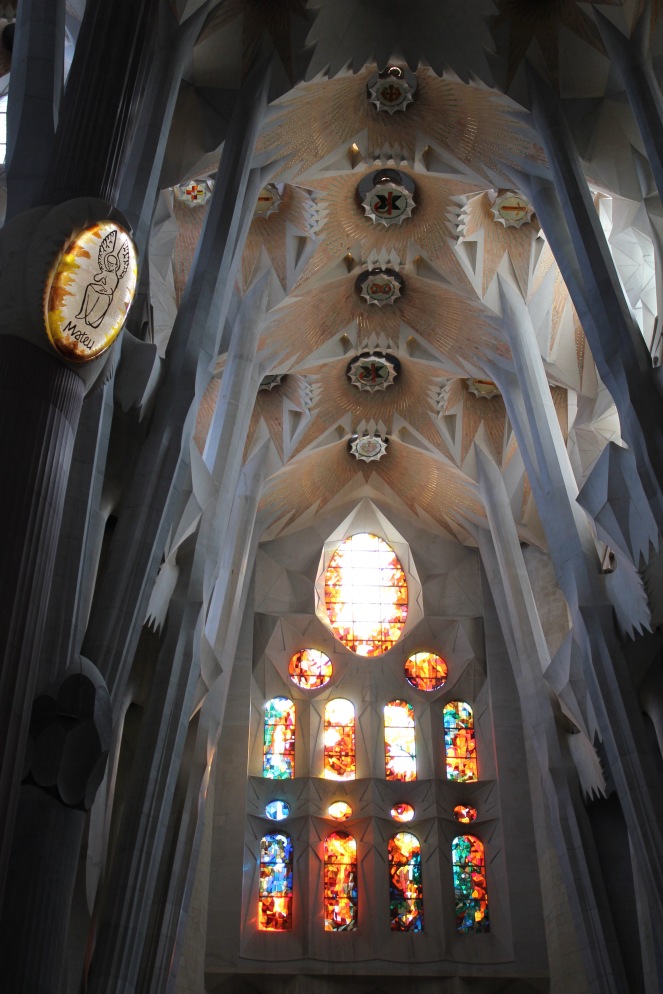 This is the view down the east side of the church to what will the front of the church. The different coloured stone used in the columns is clearly evident. 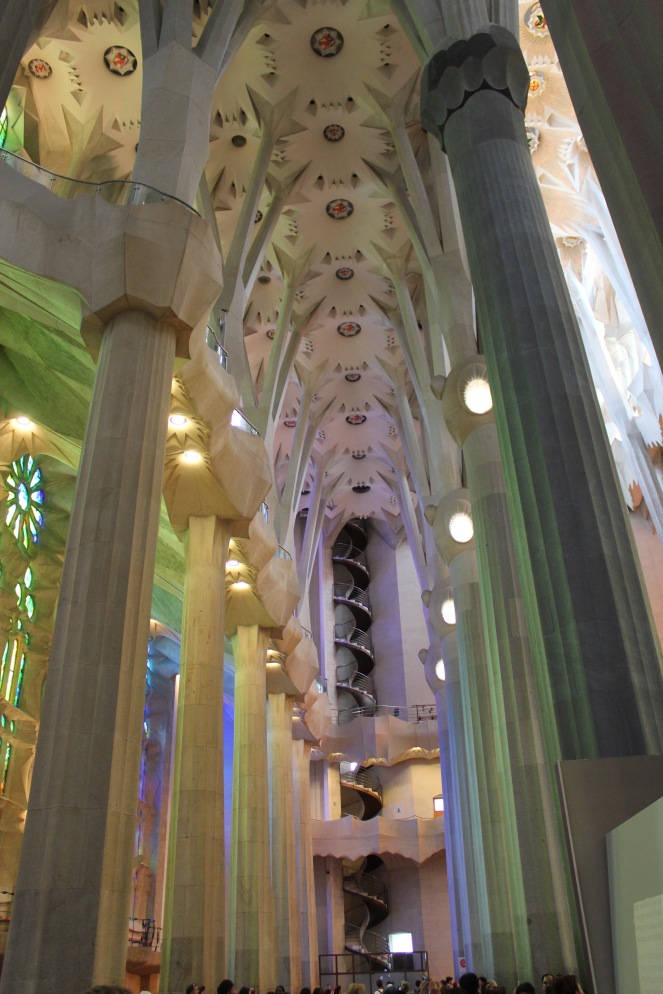 Overall, the experience of visiting this church is very uplifting, and the feeling of being in this special light lingered long after I’d left.

We had the benefit of a small guided tour of the hospital of Saint Paul, and the outside of the Sagrada Familia, run by Context Tours. We were very fortunate to have Bernat Carrau, a practicing Catalanian architect, as our docent. He was able to put these buildings into historical, political and architectural context which was invaluable in allowing us to make a deeper connection with them.

This is the second Context Tour we’d done, the other was in Rome. I highly recommend them as a company. Easy to book, excellent communication, and they use historians, archeologists, and the like, as guides. They also limit numbers to about six on any tour. Larger tour parties give you headphones and you walk around in groups of 20 or more. We saw many of these and were glad we chose Context.

The hospital was amazing, by the way, as were Casa Batlló and Park Güell which we also visited, and I’ll post about these later, subject to wifi.