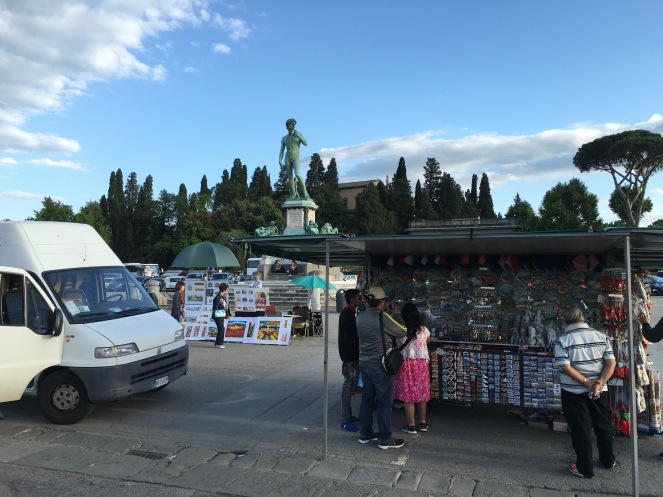 On the hill above Florence, among hundreds of tourists waiting for the sunset, and stalls selling everything from hats to necklaces to postcards to framed pictures of the Blessed Virgin Mary stands David. You can just make him out on the tree-line in the photo above.

Not the real David, but a copy.

The stalls are here because there are tourists. and everywhere there are tourists, or where tourists walk to attractions, there are stalls or roadside sellers. Sunglasses? Si. Selfie-Sticks? Si, pick a colour. Umbrellas, a roaring trade when it starts raining, are also in abundance. It seems that Italians do not like to get wet; when it rains they quickly open tiny one-person umbrellas, or stand in doorways until the shower has passed.

But back to David.

The original was installed at the entrance to the Palazzo Vecchio in 1504, where another copy stands.

The real David, the one sculpted by Michelangelo, is at the Academia Museo, where he was moved in 1873 to protect him from damage. And here he is.

The Academia also contains works removed from Cathedrals because they were too fragile to remain there, for safe keeping, or because the churches closed. Among these was a work attributed to Giotto, Madonna and Child Enthroned between St John the Baptist and Barnard and Eight Angels. This was painted in 1356, and you can get close enough to see the gold leaf application and the brush work.

We also visited the Duomo, with its massive dome. Two men competed to design the dome, Lorenzo Ghiberti and Filippo Brunelleschi, but it was latter who  eventually gained sole responsibility and completed it in 1436. It took 16 years to construct.

The rest of the church is quite austere, as the cardinal the time wanted restraint so that worshippers could focus on God an not be distracted by artwork.

No visit to Florence would be complete without a visit to the Ponte Vecchio.

The shops on the bridge today are mostly Jewellers; when constructed it was mostly butchers. While on the bridge our guide pointed out a woman dressed all in white, with white face-paint, apparently a pick-pocket. She warned several other tour guides.

One interesting feature of the shops on the bridge are the shutters – they fold from the bottom and top of the display windows. 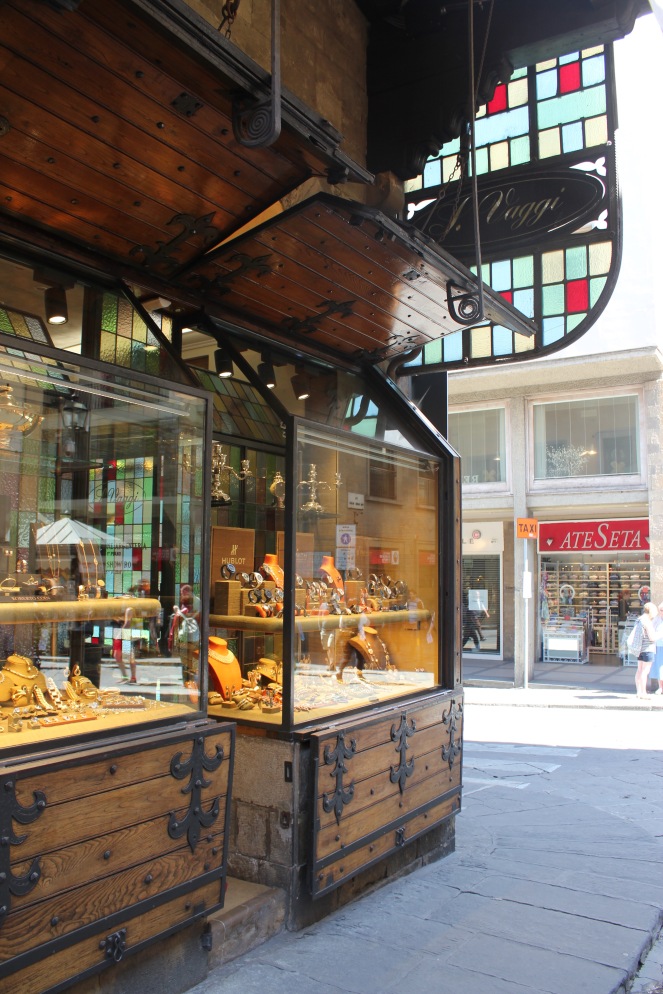 I’ll leave where were we started the post, looking over Florence for the sunset.